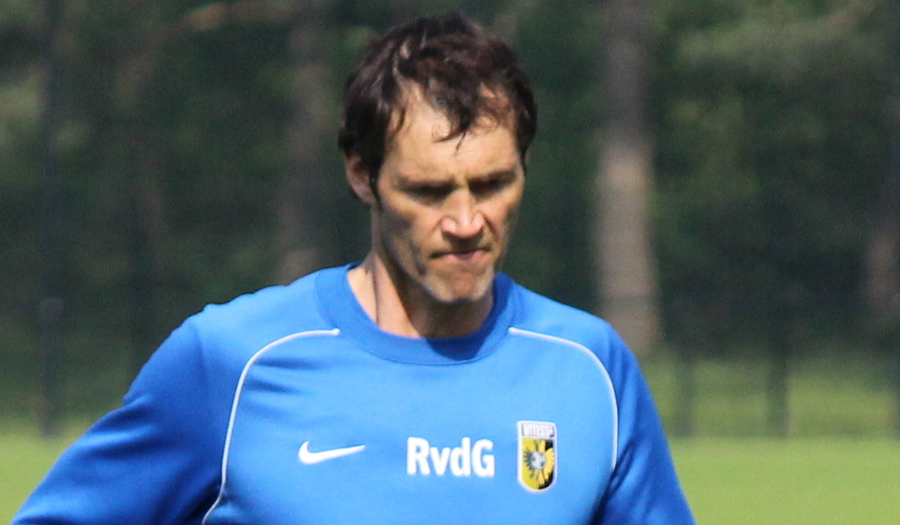 One man stands as a totem over my childhood. His career as a professional footballer started before my own birth and ended ten years ago, but he remains a ghost-like presence in my life. Simultaneously there. Yet not fully present.

Raimond van der Gouw made almost 500 appearances across the Eredivisie, Eerste Divisie and the Premier League, but it is the games he didn’t play that I remember the most. Van der Gouw was a turning point in the history of English football. He was a footballer who would happily move to England in order to not really play football at all. The history of the Premier League is littered with these players; mavericks, who arrive with fanfare and anticipation only to fade away or to be glimpsed only fleetingly. However, Van der Gouw persisted and inhabited the dugouts of the Premier League for six long seasons.

To truly get to the kernel of the enigma that is Raimond van der Gouw, foremost, I must provide some background information. The classrooms of England in 1996 were dominated by one thing. Not Britpop, not Adidas tracksuit bottoms, not even pogs. Manchester United. This was the era of David Beckham’s goal from the half-way line against Wimbledon and Eric Cantona’s flipped up collars. I stood out in my class as the only person who didn’t support United. They were ever-present in my life and I became, as it were, a spectator to this cultural phenomenon. Present and aware of everything they managed to achieve but unable to participate in these achievements.

This leads me to Raimond van der Gouw. I saw myself in him; he acted as an analogue for my own isolation from Manchester United as cultural phenomenon. He was always there on the subs bench watching a parade of other goalkeepers play ahead of him. Yet he wasn’t there. A passive agent to Manchester United’s incredible turn-of-the-millennium dominance.

To me Van der Gouw was the symbol of United’s success par excellence but, like Hamlet on the ramparts of Elsinore, I knew he was an untrustworthy apparition. Present in the shadows, understudy to Schmeichel, Bosnich, Barthez, and Carroll; Van der Gouw only earned two Premier League winner’s medals despite United winning the league in five of the six years he spent there. Both of us were on the side-lines looking in as others celebrated the vicissitudes of Manchester United in the late 90’s and early 00’s.

Perhaps I’m being slightly unjust. Van der Gouw did play 60 games for United across the league, both domestic cups, and even 13 Champions League matches, which is more than Bosnich, Ben Foster, the ill-fated Massimo Taibi, Ricardo, and Anders Lindegaard ever managed. He even put in some very able performances when called upon, notably in the 1996-97 Champions League semi-final and the 1998-99 quarter final amongst others, earning himself a Champions League winner’s medal in 1999. Though he didn’t appear in the competition that year and was only named as a substitute.

Not everyone can be a hero and van der Gouw knew this. He was happy to sit on the bench week after week, to coach the youth team goalkeepers when called upon, and to play occasional games when necessary. I admire him for this, but there’s that nagging feeling at the back of my mind, if he was so able and dependable then who knows what could have been?

Of course, I’m ignoring the decade of first team football at Go Ahead Eagles and Vitesse Arnhem which preceded his English sojourn but this bought a solitary Eerste Divisie title with Vitesse and it happened before I was born. Following his time at United he joined West Ham United and was relegated without even making an appearance despite his teammates including David James, Michael Carrick, Jermain Defoe, Paolo Di Canio, Fredi Kanoute, and Joe Cole. It seems that Raimond wasn’t destined for success, not on an individual level anyway, but football is a team sport and I can think of no greater team player than Raimond van der Gouw.

Van der Gouw’s swansong deserves a brief mention. A season at RKC Waalwijk, where he served his usual duties as reserve goalkeeper led to three years in the Eerste Divise for AGOVV Apeldoorn. Here at AGOVV, only half an hour from Deventer, where he first played in the youth teams of Go Ahead Eagles, van der Gouw picked up the gloves and became first choice goalkeeper for the first time in almost a decade.

Two mid-table finishes in succession were followed by propping up the table in his final season. AGOVV came 20th, winning only seven games and conceding 79 goals against them. It was the first time van der Gouw had played every single match in a season since 1994-95 and it had ended disastrously. However, there was one episode of joy in his final year as a professional footballer. Van der Gouw faced FC Eindhoven in his final match. He conceded two goals within ten minutes and another two before an hour of the game had elapsed. Losing 4-0 and in the final minute AGOVV received a penalty decision in their favour and who should step up but their 44 year old goalkeeper? Van der Gouw scored the only goal of his career in the 90th minute of his final match. Perhaps it would’ve been more fitting had he started as a substitute but that goal can never be taken away from him.

He was the archetypal reserve goalkeeper in my eyes and that’s an invaluable thing for any team to have. Not exceptionally gifted, but patient, dedicated and carried. He was there for Manchester United’s greatest team of the Premier League era and not many players traversed that entire epoch under Alex Ferguson, especially not goalkeepers. Manchester United’s utter dominance of English football was the background upon which my childhood was played out so I think back fondly upon Raimond van der Gouw and I thank him for being there when I needed him most. He was my figure on the subs bench when I felt like that figure amongst my United supporting friends.